Each week I will examine a wedding custom, ritual or tradition that has been passed from generation to generation.  We’ll look at it’s origin and how it has influenced the lives of our ancestors and hot it impacts us today.  We’ll also look at how we create our own customs and how these new traditions are a reaction to and a reflection of our changing world. 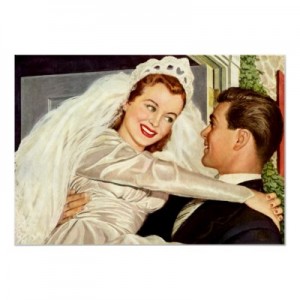 Bride being carried over threshold

Carrying the Bride: Exactly Why?

As it turns out, weddings in the days of yore sometimes followed kidnappings. This explains not only the role of the best man but also why the bride and groom customarily leave the wedding celebration before everyone else. It’s symbolic of the groom stealing away with his bride, whisking her from her family and into a new life with him. The kidnapping theme also explains why grooms carry their brides over the threshold in some cultures. In Medieval Europe, carrying a bride into her new home prevented her from seeming too enthusiastic about losing her virginity. By picking her up and taking her into their home, the groom provided an alibi for his wife’s chastity.

Interestingly, this isn’t the only origin and rationale for a groom carrying his bride across the threshold after their wedding. It appears that this custom also developed in other cultures for different reasons. Chief among these reasons was to thwart bad luck and evil spirits.

Bride being happily carried over the threshold

Superstitious Western Europeans believed that a bride who tripped over the threshold of her new home would irrevocably bring bad luck to her home and marriage. Since the husband appears to have been immune from such happenstance, the groom carrying the bride into the home proved a good way to avoid such a mishap altogether. This fear of tripping appears to have its roots in ancient Roman culture, which held a similar belief.

Much, if not all, of the original meaning behind a groom carrying his bride across the threshold has been lost in modern Western weddings. It’s remarkable that the practice continues, even if a newly wed couple isn’t entirely sure why to do it. It’s almost as if a collective memory of the danger with which a threshold may be fraught remains. And after all, it’s better to be safe than sorry.

Did you get carried over the threshold on your wedding day?  Was your threshold in some other country on your honeymoon?  I invite you to share your threshold stories with my readers!