Each week I will examine a wedding custom, ritual or tradition that has been passed from generation to generation.  We’ll look at its origin and how it has influenced the lives of our ancestors and how it impacts us today.  We’ll also look at how we create our own customs and how these new traditions are a reaction to and a reflection of our changing world.

White has long been accepted as the traditional color of the wedding dress, but wedding gowns were not always white. The marriage of Queen Victoria to her cousin Albert of Saxe- Coburg in 1840 has had more influence on weddings than any other. Queen Victoria put the wheels in motion by marrying in white. Though brides continued to wed in gowns of different colors, white was now set as the color of choice for weddings and has continued ever since. 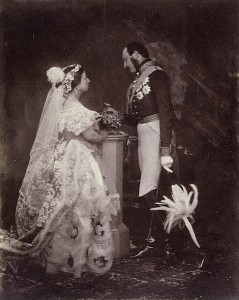 The Industrial Revolution also brought about change. By the 1890’s and the arrival of the department store, almost every woman could realize her dream of being married in a “new” wedding dress. The white dress was gaining popularity and in 1890, Ladies Home Journal wrote: “That from times immemorial the bride’s gown has been white”. Although this statement was not true, it shows how deeply accepted it was that a wedding gown be white. Although white was popular, some brides, especially the frontier brides, wore dresses that were more practical and could be worn after the wedding. As wedding dresses closely resembled the fashions of the time, only a little alteration was needed for the dress to be perfect to wear again.

Edwardian brides took the traditions of their Victorian ancestors to new extremes. Fashions became more extravagant as the decade progressed, but came to a screeching halt with the outbreak of WWI. Styles became simpler, and also reflected the changing role of women in society with hems getting shorter and the disposing of tightly laced corsets. Coco Chanel was a powerful force behind the change in women’s’ fashions, and was the one who officially introduced the short wedding dress in the 1920’s. It was a white knee length dress worn with a long train. This cemented white as the universal color of the wedding dress. 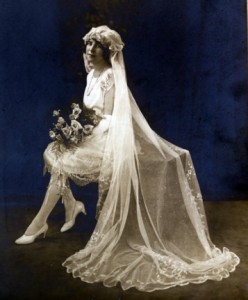 When the Depression hit, brides made do with their “best” dress for the wedding. My great grandmother, who was married in 1928 had a new white wedding dress, but after the wedding she dyed it navy, keeping only the collar and cuffs white—a common practice at that time. During WWII, women considered it their duty to give up the traditional wedding , although most brides might be engaged only for a few weeks or even days before the wedding took place. This did not leave enough time to find a wedding dress so the best suit had to do. If the bride was set on having a white dress, one could be borrowed or rented for the ceremony. If both the bride and groom were in the military they were married in their respective uniforms.

After the war, prosperity made it possible for the large dream weddings inspired by the Victorian era to become a reality. Grace Kelly’s marriage to Prince Monaco garnered much publicity because of its grand fairy tale wedding. She wore a white silk and lace gown. The focus of wedding dresses has shifted since the 1950”s. The emphasis now is on the individuality of the bride. So whatever color you choose to be married in, you now know a bit more behind the tradition of the white wedding dress. 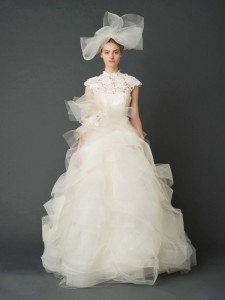 McIntyre, K. (n.d.) [The History of the White Wedding Dress]. Retrieved from:  http://www.fromtimespast.com/wedding.htm

Choose Seattle For Your Destination Wedding New trend in weddings: camping, hiking and everything outdoors!
Scroll to top